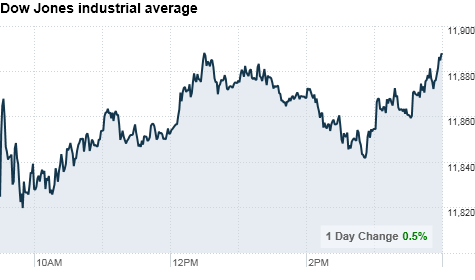 Oil prices continued to trend higher amid the ongoing tensions in Egypt. Crude prices spiked more than 4% Friday on worries about potential disruptions to shipments through the Egypt-controlled Suez Canal. Oil prices gained 2.9% to settle at $92.19 a barrel on Monday. That marked its highest close since Oct. 2, 2008.

"The market is very nervous," said Andrew Lebow, a broker with MF Global. "We have so much crude that goes through Egypt that it really becomes a concern."

It's not just oil rising. Other agricultural commodities, such as corn and wheat moved higher. All were up more than 2% on Monday.

"I think stocks got sidetracked by Exxon's results earlier in the day and once people got a chance to put Exxon aside re-focus on the Egypt situation we saw commodities break out," said Frank Davis, director of sales and trading at LEK Securities.

Protests in Egypt continued over the weekend, leading rating company Moody's Investors Service to downgrade its rating on the nation's debt to "negative" from "stable".

Stocks recovered a portion of Friday's dismal trading session, where stocks logged their biggest drop in months following the rising tensions across Egypt.

"While there was no materially-negative news out of Egypt, clearly the situation hasn't calmed down much," said Michael James, senior equity trader at Wedbush Morgan Securities.

Companies: Technology shares were mixed after Intel (INTC, Fortune 500) said it discovered a manufacturing flaw in one of its chips that would cost the company $300 million in revenue this quarter.

Intel's stock was unchanged on the news, but shares of rival AMD (AMD, Fortune 500) shot up more than 4.5%.

Over the weekend, Massey Energy (MEE) was acquired by rival Alpha Natural Resources in a $7.1 billion deal. Shares of Massey jumped 9.4%.

"If we get positive news there, the market could react strongly if it shows that the stimulus is working and there has been a further recovery in the U.S. economy," Tom Winmill, portfolio manager at Midas Funds..