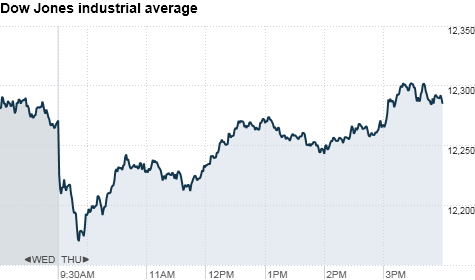 "It's a lot of wait and see at the moment," said Frank Davis, director of sales and trading with LEK Securities.

Financial shares were the biggest laggard Thursday after the Senate issued a report late Wednesday that slammed Goldman Sachs as a "case study" of the recklessness and greed that set off the 2008 financial crisis.

Bank stocks were also lower after an announcement from the Federal Reserve that it plans to slap fines on some of the largest U.S. banks, alleging "unsafe and unsound practices" in how they handled foreclosures.

"A combination of the announcement by the Fed yesterday, plus the Senate's comments on Goldman Sachs in particular are weighing on the sector," said Richard Staite, U.S. banks analyst with Atlantic Equities.

Technology shares also dropped after industry tracking firms Gartner and IDC both said PC sales unexpectedly fell in the first quarter. Shares of Intel (INTC, Fortune 500), Microsoft (MSFT, Fortune 500), Hewlett-Packard (HPQ, Fortune 500) and Dell (DELL, Fortune 500) were all down between 1% and 3% each.

Offsetting the losses in tech and banking, energy stocks such as Chevron (CVX, Fortune 500) and Marathon Oil (MRO, Fortune 500) were higher as oil rebounded back over $108 a barrel.

The U.S. Bureau of Labor Statistics reported that the Producer Price Index rose 0.7% in March. Prices at the wholesale level were expected to have risen 1.1%.

The Internet search giant said it earned an adjusted profit of $8.08 a share in its first quarter, while analysts expected earnings of $8.10 a share, according to Briefing.com.

Car sharing company Zipcar (ZIP) soared more than 65% on its first day of trading after its IPO.

Asian markets ended mixed. The Shanghai Composite edged lower by 0.3% and the Hang Seng in Hong Kong slipped 0.5%, while Japan's Nikkei ticked up 0.1%.

Currencies and commodities: The dollar rose against the euro, but fell against the Japanese yen and the British pound.

Foreclosures off 30% this year