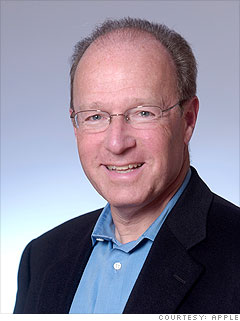 A relative newcomer, Cooperman joined Apple in November 2007 as the last move in a series of legal musical chairs (he left Oracle for Apple as Donald Rosenburg was leaving Apple for Qualcomm; Rosenberg had replaced Nancy Heinen, who is fighting SEC charges in the backdating case). Jobs began recruiting Cooperman last August after getting the okay from his friend Larry Ellison, according to Law.com, sweetening the pot with restricted stock worth $25 million. "The switcheroo was Larry's idea," wrote Fake Steve Jobs last September, when the move was announced. "Now that the feds are circling again he says I need some bad-ass mofo leading my team, not some namby-pamby Valley type. 'I want you to have my consigliere,' he told me. 'He's a good man. He can be trusted. Listen to him.'"