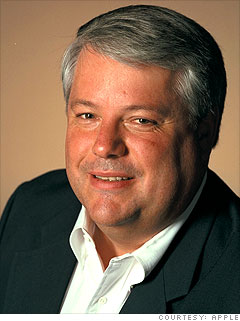 A long-time Apple senior exec -- he joined the company in 1996 after a six years at Coopers & Lybrand and a sojourn at ADP, where he was CFO of the claims services division -- he has the job formerly held by Fred Anderson (the ex-Apple CFO thrown under the bus in the options backdating scandal). Oppenheimer's is a familiar voice to analysts and tech journalists. He turns up every three months on the company's quarterly earnings call to rattle off Apple's sales and revenue numbers and to offer his traditionally conservative guidance for the coming quarter. He took a lot of heat from shareholders in January when guidance even more pessimistic than usual sent the stock into a one-day 16-point nosedive.