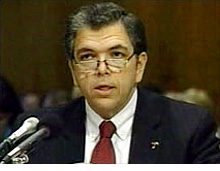 As the subprime storm was brewing, Prince famously scoffed at the idea it could hurt his bank. Citing Citi's then-plentiful liquidity, he told the Financial Times in July 2007: "...as long as the music is playing, you've got to get up and dance. We're still dancing."

The music, of course, soon stopped, and Citi's shareholders are still paying the tab for the ball. The banking giant reported billions in writedowns for that quarter, and Prince stepped down soon after. Citi continues to strugge with its massive holdings of mortgage-backed securities, and has racked up more than $45 billion so far in writedowns.