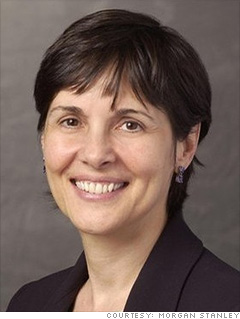 As heir apparent to chief executive John Mack, Cruz was arguably Wall Street's most powerful woman. While co-president, she pushed the firm to take on more risk to generate bigger returns, in particular by using mortgage-backed securities.

By some accounts, she told her traders to cut their positions when mortgage weakness appeared in the spring of 2007. No matter. Mack fired her in November 2007, as the subprime-mortgage crisis was roiling Wall Street. The bank's writedown tally so far is about $24 billion.