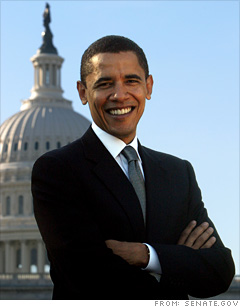 President-elect Barack Obama
In a rare off-message moment for Barack Obama's presidential campaign, a top economic adviser privately assures Canadian officials in February that his candidate didn't really mean it when he threatened to renegotiate the North American Free Trade Agreement, which U.S. blue-collar workers complain has shifted jobs to Canada and Mexico.

"Political maneuvering" was how Austan Goolsbee described Obama's protectionist rhetoric to Canadian authorities. Smart politics - until a Canadian government memo of Goolsbee's meeting leaks out and Goolsbee is banished to no-media-allowed shed for the remainder of the election. -- By Nina Easton, Fortune Washington editor