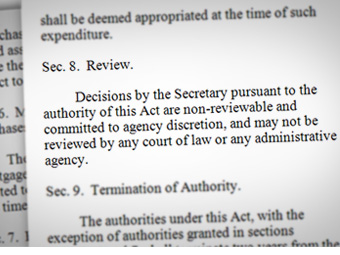 From Henry Paulson's original bailout proposal: Decisions would be "non-reviewable." In other words...'trust me!"
Treasury Secretary Henry Paulson learns how not to reach for $700 billion. In September, days after Lehman Brothers collapses and two other giants teeter on the abyss, Paulson submits his "break the glass" plan for saving the U.S. financial system.

All of three pages, the proposal seeks carte-blanche access to $700 billion in government funding to buy up troubled mortgage assets at the root of the financial crisis - with scant details on how or where the money will be spent.

Just as galling, Paulson includes a provision in the bill that will exempt his spending from court challenges. Congress axes the legal cloak, prompting Rep. Barney Frank to quip, "We have disexempted him."

But the damage is done, and the proposal fails in the House Sept. 29 - triggering another massive market sell-off. -- By Colin Barr, Fortune senior writer