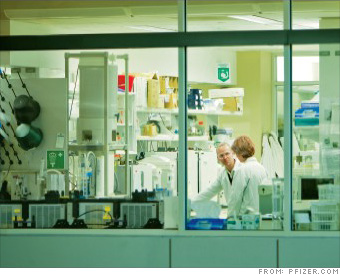 • 2009 Fortune 500: Top 50
Fortune rank: 11
2008 profit: $8.1 Billion
The world's biggest drugmaker boosted international sales and announced a $68 billion deal for rival Wyeth as it prepared for upcoming patent losses on its best-selling drugs including cholesterol pill Lipitor.
Profits edged down half a percent in 2008, but the Wyeth acquisition gave investors hope that Pfizer can replace lost earnings from lost patents that affect 40% of sales in the next three years.