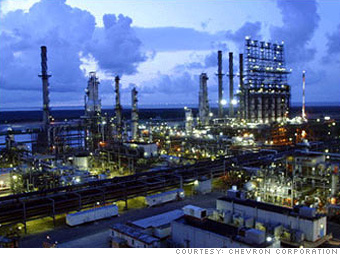 • 2009 Fortune 500: Top 50
Fortune rank: 2
2008 profit: $23.93 Billion
Chevron offset the sharp drop in oil and gas prices in the second half of 2008 by bolstering its refinery business, where profits increased 10-fold in the fourth quarter.
The oil company, second-largest in the U.S. behind Exxon, posted a record annual profit of $23.9 billion even as its oil and gas production fell each quarter during the year.