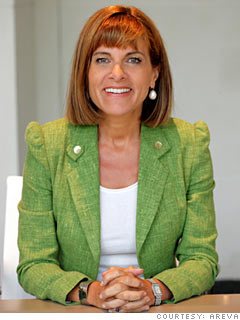 CEO
AREVA
2008 rank: 6
Country: France
France's high-profile voice on nuclear energy, Lauvergeon, 50, is pursuing new projects even in a difficult environment. She's investing heavily in markets like China, India, and the U.S., where the company has submitted a license application for a new enrichment facility in Idaho.

Though Siemens announced it would sell its stake in Areva early in 2009, Lauvergeon said in June that the company will seek additional strategic investors.

She serves on the boards of GDF-Suez, Total, and Vodafone.