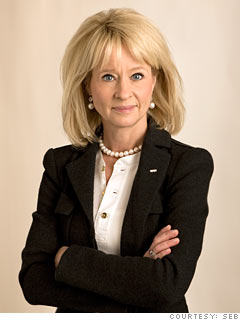 President and CEO
SEB
2008 rank: 7
Country: Sweden
It was a tough year to be a bank CEO, but Falkengren, 47, survived the recession despite substantial write-offs. 2008 operating profit was down 27% to $1.7 billion.

Falkengren consolidated the bank's troubled Baltic operations in Estonia, Latvia, and Lithuania into a separate division -- SEB Baltic and suspended its dividend to stabilize the company (its core business in Northern Europe and Russia remains strong).

Falkengren, SEB's first female president and CEO, has worked at the bank since she started as a trainee in 1987 after graduating from the University of Stockholm.