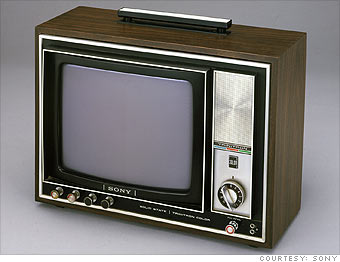 • Sony: Lost in transformation
Groundbreaking color television technology ultimately propelled Sony to the forefront of the consumer electronics industry in the 1960s. Though television already served as the focal point of most living rooms throughout America and Japan, color television was still a new and largely imperfect phenomenon. Recognizing room for leadership, Sony moved in.

After a few failed experiments, Sony engineers developed a television set that efficiently generated an image of unparalleled brightness and precision, differentiating it from the existing field of dark, blurry, and costly models. Released in 1968, Sony's patented "Trinitron" earned the company a reputation for quality and allowed it to reign supreme in color televisions and computer monitors through the 1990s, though its success with the Trinitron would later stall Sony's entry into the flat-screen market.