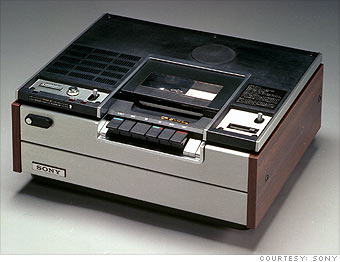 • Sony: Lost in transformation
The battle between Betamax and VHS to become the predominant video-recording format proved a heated rivalry, and culminated in one of Sony's greatest embarrassments. While most considered Sony's 1975 Betamax technology superior to VHS, Sony lost to its competitor because of strategic miscalculations.

Sony was reluctant to license the Betamax technology to other electronics equipment manufacturers and failed to realize that consumers and film producers would value VHS's longer recording capacity. More companies produced VHS players than Betamax players, and consumers flocked to the less expensive VHS systems. In 1988, Sony acknowledged defeat when it began manufacturing VHS VCRs, though it continued making Betamax players through 2002.