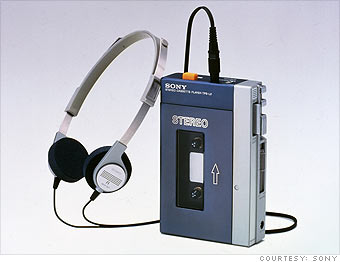 • Sony: Lost in transformation
Long before "iPod" became synonymous with music-on-the-go, Sony's Walkman revolutionized the way people listen to music, adding a beat to jogs and commutes worldwide. When the first large shipment of Walkmans arrived in the United States in June 1980, the less-than-14-ounce, battery-powered, $200 music player flew off the shelves and left many eager consumers on waiting lists throughout the country.

Then in 1984, Sony introduced the Discman -- the first portable compact disc player -- promoting the company's new CD technology and helping to make CDs the format of choice. While the Walkman crowned Sony the 20th century's king of handheld music, Sony's position at the top kept it from exploring digital music ahead of its competitors, letting Apple overtake Sony as the portable music standard-bearer with the release of the iPod.