From Betamax to Blu-ray, Sony has had its share of highlights and low points over its more than 50 years. Here are some of the most memorable. 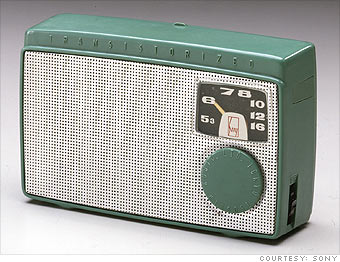 • Sony: Lost in transformation
Sony first established itself as an international player in the consumer electronics industry with its innovative transistor radio technology and marketing prowess. Though U.S.-based Regency Electronics produced the original transistor radio, Sony was the first to recognize the gadget's consumer appeal and to successfully market a model built entirely from its own components.

Sony later refined its original TR-55 -- which debuted in 1955 -- into the "pocket-sized" TR-63 and TR-610 models of 1968, which quickly turned into global sensations and helped Sony gain a crucial foothold in the European and American markets. Sony sold 500,000 TR-63 units worldwide, an accomplishment some attribute to its clever marketing tactics: Sony salesmen tried to convince customers that the TR-63 transistor radio was truly pocket-sized by wearing shirts with larger-than-average pockets.
By Josh Glasser, contributor
NEXT: Hit: Trinitron