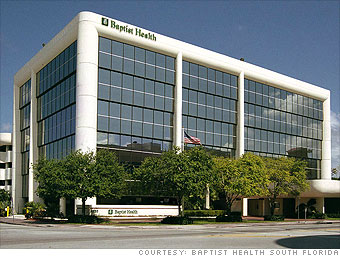 The South Florida hospital system has never had a layoff, even during the recent economic downturn. In the rare occurrence of a job elimination, the affected employee has been given a position elsewhere in the company.

The decision to avoid layoffs has been part of the company's core culture since it was formed in 1990. This past summer BHSF launched "the Baptist Health Way," a promise to provide employees with a supportive work environment, job security and above-average salaries and benefits. To avoid layoffs during the recent economic downturn, CEO Brian Keeley kept a conservative eye on finances, focused on quality care and productivity and stalled hiring. Even so, a total of 600 new jobs were created in all of 2009.

Next: See 9 more Best Companies with no layoffs