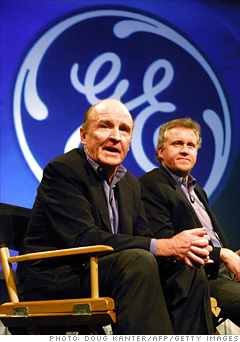 Welch and Immelt, in happier times.
Loss: $423 billion
Peak market cap: $601 billion (August 2000)
Recent market cap: $178 billion
Ticker: GE
GE stock was lofted into the stratosphere by the irrational exuberance of the late 1990s, which meant that there was only one way it could go when CEO Jeff Immelt took over for Jack Welch in 2001 -- down. And down it has gone, shedding 70% of its value and betraying Welch's bluster when he handed over the reins. "It's all going to unfold very nicely," he said then. Not for GE investors it didn't.