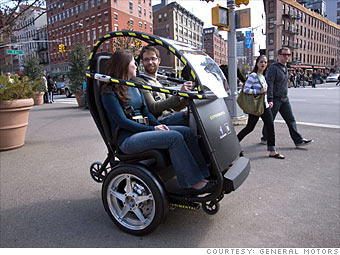 • TalkBack: Reader picks for dumbest moment
It became clear this spring that General Motors was going to have to get smaller to survive, but this was ridiculous. A week after President Obama gave the company a 60 day deadline to avoid bankruptcy, GM took time out from its turnaround efforts to unveil the PUMA, a two-seat vehicle being developed with Segway that looked more like a rickshaw than a car.

The vehicle, capable of going only 35 mph and traveling 35 miles between charges, got lots of attention, but did little to change popular opinion about the company that had ridden large SUVs to the cusp of failure. On June 1, GM filed for bankruptcy.