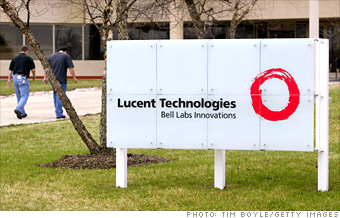 Loss: $274 billion
Peak market cap: $285 billion (December 1999)
Recent market cap: $11 billion (2006 merger with Alcatel)
Ticker: ALU
Lucent was one of the great telecom success stories of the late 1990s. But the company was soon unmasked as little more than a hype job, using aggressive accounting to pad its earnings. The company later agreed to settle SEC fraud charges -- though not before telling Fortune the case was really just a "failure of communication." That earned Lucent a $25 million failure-to-cooperate slap on the wrist two years before it was sold to French communications firm Alcatel.