GM: Who could replace Wagoner? 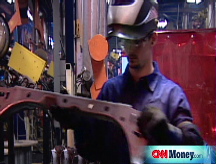 NEW YORK (Fortune) -- Now that President-elect Obama has suggested that General Motors and the rest of the Detroit Three may need to install new management as a condition of a bailout, the question is: Who will become GM's next CEO?

The auto industry is notoriously complex and luring seasoned executives to work in Detroit isn't easy.

Some members of GM's (GM, Fortune 500) board of directors may get washed out along with Wagoner, eliminating a bloc of Henderson supporters. Besides, any government bailout would be accompanied by demands for a wholesale restructuring of the company with limits on executive control that Henderson would likely find objectionable.

The names of several other candidates have been raised in recent days. But they tend to be the usual suspects and could be easily disqualified on one or more grounds.

GE's Jack Welch was everybody's favorite CEO in the 1990s. But his star has dimmed in recent years and, at age 73, he probably isn't interested in some intensely hard work for possibly very little compensation.

Renault-Nissan CEO Carlos Ghosn, 54, led an historic turnaround at Nissan but has found the going more difficult at Renault. He'd love to make GM the North American third leg of his Franco-Japanese alliance, but Congress isn't likely to fund a GM partnership with a foreign company. If Ghosn did take over, it would probably be as chairman of the troika, meaning someone else would have to be found to run GM.

Home-town hero Roger Penske's name comes up every time there's a job open in Detroit and he knows the industry inside and out. Still a busy workaholic at age 71 with a successful auto retailing business and as the distributor of Smart cars, he would be unlikely to accept the post without a personal appeal from the President-elect.

But if the government "car czar" running GM digs a little deeper, he is likely to find some less heralded though equally able managers who have enjoyed success running large industrial companies.

Here are three he ought to consider:

Robert Lane, 59 chairman and CEO of Deere & Co. The iconic maker of agricutural equipment is like a little GM: based in the Midwest with workers represented by the United Auto Workers, it sells to consumers through dealers, and faces strong foreign competition.

Lane has focused on making Deer run smarter, faster, and leaner, and profited handsomely from his success. He received compensation of $52.4 million in 2007.

Last year, it notched a profit margin of 22% on revenues of $57.9 billion -- pretty impressive by anybody's standards, especially GM's.

Sergio Marchionne, 56, CEO of Fiat S.p.A. An outsider to the auto industry, Marchionne became CEO in 2004 of a company that sounds very much like GM today. Fiat had talent, knowledge, and skills, but the problem was culture: Too many platforms, too many people doing the same thing across brands, and nobody responsible for anything.

Marchionne instilled responsibility in management, streamlined the design process, and rationalized platforms. He also got GM to pay him $2 billion to end an engine-building alliance.

In 2005, Fiat recorded its first quarterly profit in more than four years.

"Marchionne is tough as nails and smart as all get out," said executive recruiter Greg Carrott, of Chicago-based Cavoure LLP. "Besides his success at Fiat, he speaks fluent English and spearheaded a turnaround at a Canadian packaging company in the 1980s."

A year ago, Marchionne crashed his private Ferrari 599 GTB on a highway in Switzerland but walked away unscathed. That sounds very un-GM-like but perhaps that's exactly the kind of joie de vivre that GM needs.