Biden: Taxing health benefits 'not the way to go'

Vice president says that Obama administration would not rule out new tax on medical benefits. 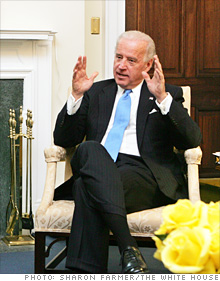 (CNN) -- Vice President Joe Biden said Sunday that the Obama administration opposes taxing the medical benefits employers provide workers to pay for health care reform, but he refused to rule it out entirely.

Obama has outlined a series of steps to lower current costs and raise taxes to pay for an overhaul of the health care system, including creation of a government-funded "public" option for the nation's 46 million uninsured. He will speak Monday to the American Medical Association, which questions how a public option can work.

On Saturday, the president proposed $313 billion in cuts and new savings over the next decade, with some of the funds coming from expected increases in efficiency, reductions in excessive hospital payments and drug cost savings from individuals enrolled in both Medicare and Medicaid.

Biden noted that the administration also seeks to raise $300 billion in taxes by limiting the deductions of high-income Americans.

Republican leaders join Obama and Democrats in calling for health care reform, but oppose a public option as a potential boondoggle that would be unfair to private insurers.

"If the government is in the insurance business, there won't be any other insurers Senate Minority Leader Mitch McConnell of Kentucky told the CBS program "Face the Nation."

"It's inevitable because the taxpayers will be backing up the program."

McConnell said "virtually every Republican" would oppose a government-funded public option, which Obama supports to provide coverage for those currently uninsured and to stimulate competition with private insurers to lower costs.

Possible alternatives to a public option include private cooperatives, like electricity cooperatives, owned and paid for by communities that would compete with existing insurance programs.

Supporters say such a program would require initial government support, but eventually would provide the kind of competition Obama seeks without creating a new government bureaucracy.

Health and Human Services Secretary Kathleen Sebelius told CNN's "State of the Union" on Sunday that Obama was open to whatever ideas will work to address a problem that must be addressed.

"The costs are crushing us," Sebelius said. "It's hurting families. Our businesses are less competitive. We can't continue on this pathway."

Like Biden, she warned against a possible tax on medical benefits, saying it would affect privately owned plans that currently cover 180 million Americans.

"There is still a great deal of disagreement on whether or not taxing benefits at any level of any kind really does put us a step forward or take us a step back," Sebelius said.