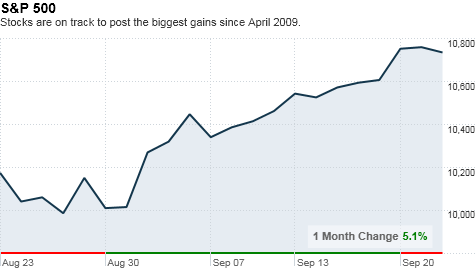 The Nasdaq (COMP) declined 15 points, or 0.6%, as the tech-heavy index was dragged down by Adobe's (ADBE) 20% plunge. Investors were disappointed after the software developer said that sales and earnings for its next quarter might fall short of expectations.

Stocks have already logged significant gains in September and are still on track to post the biggest monthly gains since April 2009. So far this month, the S&P 500 is up more than 8%.

"Sentiment has really changed this month," said Ron Kiddoo, CIO at Cozad Asset Management. "Investors are thinking maybe things aren't quite as bad, and the economy isn't headed for a double-dip."

Because of the nice run over the past few weeks, Kiddoo expects stocks to trade in a narrow range through the end of the month.

"There's no major catalyst to move the market due until the monthly jobs report in early October, and then earnings season," he said.

Stocks rallied Tuesday after the Fed said it would take any action necessary to support the recovery, but gains were short-lived as investors considered the Fed's downbeat economic outlook.

While the Fed said it expects improvement ahead, the central bank also cautioned that "the pace of economic recovery is likely to be modest in the near-term."

The uncertainty drove investors toward gold, with the precious metal surging to a new record.

Traders are also closely watching the Fed's securities purchases for any indication of how Tuesday's statement about the possibility of more quantitative easing (buying long-term U.S. Treasurys to boost the economy) translates into real action.

The yields on the 2-year and 5-year notes eased toward new lows, signaling some strong buying as prices and yields move in opposite direction.

Companies: Microsoft (MSFT, Fortune 500) said late Tuesday that it was hiking its quarterly dividend by 23% to 16 cents a share. Shares of Microsoft fell 2.2%.

Shares of Adobe Systems (ADBE) got slammed after the company issued a sales and earnings outlook that fell far short of analysts estimates. After the closing bell Tuesday, Adobe reported a solid quarterly profit but the disappointing guidance sent the stock tumbling. Shares closed down 19%.

Asian shares ended the session mixed. The Nikkei in Japan lost 0.4%, while the Hang Seng in Hong Kong and Shanghai Composite closed the session with modest gains.

Currencies and commodities: The dollar tumbled against the euro, the Japanese yen and the British pound.

Crude oil for November delivery, the most active contract, fell 26 cents to settle at $74.71 a barrel.

The Buzz: Markets dancing in September. But why?