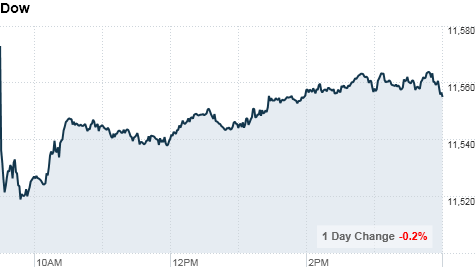 The Dow Jones industrial average (INDU) fell 18 points, or 0.2%, with nearly two-thirds of the 30 blue-chip index issues in the red. Kraft (KFT, Fortune 500), Procter & Gamble (PG, Fortune 500) and Microsoft (MSFT, Fortune 500) were the biggest decliners of the day, though none fell by more than 1%.

Volume was low Monday and is expected to stay lighter than normal for a holiday week, because of a major snowstorm that blew through the Northeast late Sunday and into Monday. Retailers were taking a hit as the storm was keeping shoppers at bay, but financials were showing some resilience.

Despite a downbeat start to the last week of 2010, Campagna expects markets will turn around to end the week higher with a so-called Santa Claus rally.

Stocks are up more than 5% for the month of December, and are poised to end the year with double-digit gains.

On Thursday, stocks ended a strong week on a quiet note, as mixed economic data kept investors from jumping in ahead of a long holiday weekend.

Markets were closed Friday for Christmas.

China's rate hike: The People's Bank of China raised its benchmark interest rates by a quarter of a percentage point, increasing its one-year lending rate to 5.81% and the one-year deposit rate to 2.75%.

It was the second hike in just over two months. China raised rates in October for the first time in three years.

"China's worried about inflation, which is being driven higher by food prices," Campagna said. "They're taking steps to slow down their economic growth, and investors think a slowdown in Chian could lead to softer global growth."

Companies: Retail stocks were hit Monday after a blizzard that pummeled the East cost disrupted post-Christmas shopping days, which typically are among the busiest of the year.

Shares of Nordstrom (JWN, Fortune 500) dropped almost 2%, and the retailer was among the biggest losers in the S&P 500.

"The day after Christmas is a huge shopping day, and there's some fear that retailers missed out on those sales because of the weather," Campagna said.

Airline stocks edged lower earlier in the session as the winter snowstorm forced carriers to cancel and delay hundreds of flights Sunday and Monday. But shares moved into positive territory as the day wore on, even as major airports in the New York area remain closed.

Last week, American Airlines said that Expedia "is making it more difficult for consumers to find American flights and fares on its website," and the Dallas-based airline pulled its flights from Orbitz.

H&R Block's (HRB, Fortune 500) stock sank more than 7% after the Office of the Comptroller of the Currency ordered HSBC to terminate its contract with the tax preparer. The bank is no longer obligated to fund tax-refund loans to H&R Block customers. The loans were designed to last about two weeks until taxpayers received their refunds from the government.

Shares of Netflix (NFLX) dropped 2.5% Monday, after a Barron's report said the stock has gotten too expensive and is due for a pullback. Shares of the online video rental service have more than tripled this year.

On the flip side, Mastercard (MA, Fortune 500) and Visa (V, Fortune 500) rose about 3%. The credit card companies had recently taken a hit after the new debit card fee rules were enacted.

AIG got a boost after the insurer said 36 banks agreed to provide $4.3 billion of credit lines that will become available after AIG finishes repaying the U.S. Treasury Department and the Federal Reserve Bank of New York. The amount includes $1.3 billion for AIG subsidiary Chartis. Shares of AIG (AIG, Fortune 500) surged more than 10% midday and closed the day 9% higher. In fact, AIG is one of the best performing stocks in the S&P 500 this year.

World markets: European stocks ended lower. The DAX in Germany and France's CAC 40 both fell about 1%. Britain's market was closed for a holiday.

Currencies and commodities: The dollar eased against the euro, the Japanese yen. It edged slightly higher versus the British pound.

Oil for February delivery slipped 51 cents to $91 a barrel.