Futures weighed down by Citi, Apple 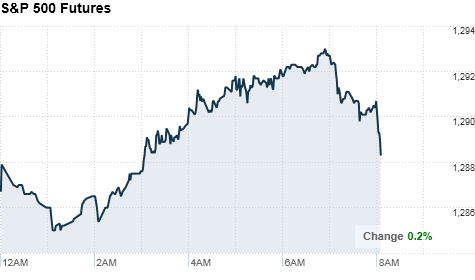 NEW YORK (CNNMoney) -- U.S. stocks will be weighed down by tech and bank shares at Tuesday's open following weak earnings from Citigroup, and worries about Apple CEO Steve Jobs' leave of absence.

Apple's stock slid in premarket trading Tuesday, a day after the company announced CEO Steve Jobs will take a medical leave of absence for the third time since 2004, and the second time in two years.

While the news may weigh on Apple shares in the coming days, the slump isn't likely to last long, said Tom Winmill, portfolio manager at Midas Funds.

Last week ended with the Dow and the S&P posting their seventh straight week of gains. That's the longest streak for the Dow since the two months of consecutive gains that ended last April.

While Citi's quarterly earnings disappointed, many other companies are on deck to report results this week -- and Winmill said he is bullish about the quarter.

Is Citi about to leave the doghouse?

"I think overall we'll see earnings come in this quarter as they did in the prior quarter, with companies continuing to surprise on the upside," he said.

Companies: Investors will be keeping a close eye on Apple's stock Tuesday. Shares of the tech giant closed down 6.1% in Frankfurt, after Monday's announcement from Jobs. In U.S. pre-market trading Tuesday, shares of Apple dipped about 5%.

Jobs' leave of absence comes two years after the Apple CEO took a six-month sabbatical, during which he received a liver transplant. The last time the company announced a medical leave for Jobs, shares fell as much as 6% on the news but ended the day down only 2%.

"This is a very short-term phenomenon," Winmill said. "Jobs is the face of Apple, so there's no question that a lot of people think Apple is a one-man band, but Apple's really anything but -- and the prior time he went on leave, it proved to be a great buying opportunity."

Apple (AAPL, Fortune 500) will release quarterly results after the bell, and the maker of computers and personal electronics is expected to post a profit of $5.39 a share on $24.4 billion in revenue. Analysts and investors are also eagerly awaiting details on how many iPads Apple sold during the tablet's first holiday season.

Citigroup (C, Fortune 500) posted earnings before the opening bell that missed expectations, while revenue fell in line with forecasts. The bank reported a profit of $1.3 billion, or 4 cents per share, on revenue of $18.4 billion.

Analysts surveyed by Thomson Reuters had expected Citigroup to post earnings per share of 8 cents on $20.4 billion in revenue. Shares of Citi slipped 3% in pre-market trading.

Rival JPMorgan Chase (JPM, Fortune 500) laid the foundation for strong bank earnings on Friday when it reported a 47% jump in fourth-quarter earnings to $4.8 billion, or $1.12 per share.

Delta (DAL, Fortune 500) also reported quarterly earnings that missed forecasts, posting earnings of 19 cents per share -- compared to the 24 cents expected by analysts. Shares of the airline company dropped 3.5% before the opening bell.

IBM (IBM, Fortune 500) is slated to report quarterly results after the closing bell Tuesday, with analysts predicting the company earned $4.08 per share.

Economy: The New York Fed released its Empire Manufacturing Survey before the market open. The reading ticked up to 11.92 in January, which was in line with expectations.

After the opening bell, The NAHB's Housing Market Index will be released. Economists surveyed by Briefing.com expect the builder sentiment index to be unchanged in January from the prior month.

A stronger-than-expected report on GDP from Germany gave the euro a boost in early trading and helped lift European markets, Winmill said.

Tech and bank earnings in focus