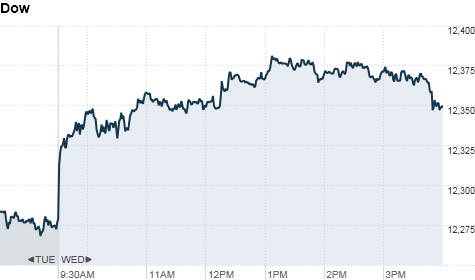 Wednesday was all about jobs, as investors look ahead to the government's payroll numbers on Friday. Before the opening bell, one report showed that employers announced fewer planned job cuts in March, even as government sector layoffs mounted.

A second report showed private sector employment rose by 201,000 in March, according to payroll processor ADP (ADP, Fortune 500). The figure came in slightly below forecasts but remained above 200,000.

Investors look to the ADP report as a guide for what's coming in Friday's government report.

"The market started off the day embracing the ADP report for payrolls, which came in pretty solid," said Howard Ward, portfolio manager for GAMCO Growth Funds. "There's a strong likelihood they won't be disappointed when Friday's number comes out."

A CNNMoney survey of 18 economists forecast an 180,000 jump in payrolls. They also expect the unemployment rate to hold at 8.9%.

So far this week, investors have shrugged off ongoing global concerns in the Middle East, Libya and Japan. Stocks in Japan rallied overnight, while shares in Europe were higher in active trading. The Dow has gained about 1% since Friday's close.

Energy: The energy sector pushed ahead after President Obama called for an increase in U.S. oil and ethanol production, to reduce the country's dependence on energy imports.

"It'll create more jobs in the U.S., which is a shot in the arm for markets," said Dan Flynn, energy trader with PFG Best.

"We have to discover and produce cleaner, renewable sources of energy," Obama said in a speech at Georgetown University. "And we have to do it quickly."

Natural gas futures for May delivery surged 2.4% on Wednesday, and have jumped more than 13% since early March.

Shares of private equity firm Apollo Global (APO) fell 4.2% after the firm priced its initial public offering at $19 a share -- the top end of its expected range.

Qihoo 360 Technology (QIHU), the third-largest Internet company in China, started trading on the NYSE Wednesday, a day after pricing its initial public offering at $14.50 a share. Shares surged 135% to $33.54.

Currencies and commodities: The dollar rose against the Japanese yen, but fell versus the euro and the British pound.

VIX: The only thing we have to fear is no fear