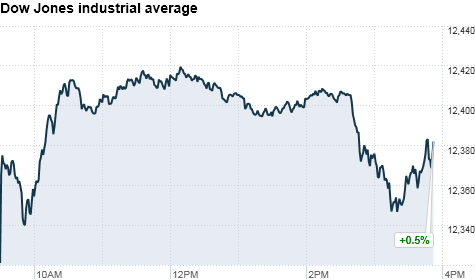 Friday's gains were broad, with 23 out of the Dow's 30 members ending higher on the day. The Dow now stands near its 52-week high, a sign of how well this market continues to perform despite the problems abroad, investors said.

Friday's jobs numbers are the latest economic data to show that the U.S. economy remains in a slow, but steady, period of economic recovery. While still elevated, the unemployment rate now sits at its lowest level in two years.

"We are doing modestly better than what most had expected, but the economy is far from perfect," said Bruce McCain, chief investment strategist at Key Private Bank.

Investors were also digesting a new offer for the NYSE (NYX, Fortune 500) from Nasdaq (NDAQ) and IntercontinentalExchange (ICE). Nasdaq and ICE offered $42.50 a share for NYSE Euronext, topping the bid from rival Deutsche Boerse by nearly 19%. Shares of NYSE jumped 13%, Nasdaq shares closed up 9% and ICE shares fell 3%.

On Thursday, U.S. stocks ended the day narrowly mixed, but the first quarter finished with solid gains despite geopolitical turmoil in the Middle East, and the March earthquake and nuclear crisis in Japan.

Companies: Shares of Krispy Kreme (KKD) plunged 21%, a day after the doughnut marketer reported earnings that came in well short of analyst expectations.

Office Depot (ODP, Fortune 500) shares sank 9% after the office supply retailer disclosed that it will have to restate its 2010 financial results after the IRS denied a claim for $80 million in tax benefits.

Economy: The Institute for Supply Management said its manufacturing index fell slightly to a reading of 61.2 in March, compared with the 61.4 reading that economists had expected.

The Commerce Department's report on construction spending showed a decline of 1.4% in February, worse than the decline of 0.7% economists were looking for.