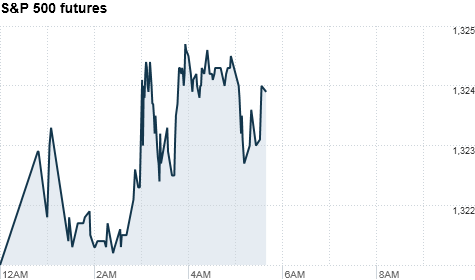 NEW YORK (CNNMoney) -- U.S. stocks were poised to open the second quarter higher, following the government's stronger-than-expected jobs report -- one of the most closely-watched economic indicators on Wall Street.

The report showed a gain of 216,000 jobs in March -- easily topping forecasts. The unemployment rate dipped to 8.8% -- its lowest level in two years.

Investors were also digesting a new offer for the NYSE (NYX, Fortune 500) from Nasdaq (NDAQ) and ICE (ICE).

"The revival in U.S. economic growth is resilient enough to withstand the shocks that we've been hit with like higher oil prices and concerns out of Japan," said Lakshman Achuthan, managing director of the Economic Cycle Research Institute.

Fed's Kocherlakota: Rates could go up in late 2011

"Even if something new came along, it wouldn't necessarily just tank the economy," he said. "The markets are probably getting a sense that the first quarter was not a bad quarter."

On Thursday, U.S. stocks ended the day narrowly mixed, but stocks posted solid gains the first three months of the year, despite geopolitical turmoil in the Middle East and the March earthquake and nuclear crisis in Japan.

Companies: Nasdaq and IntercontinentalExchange offered $42.50 a share, or $11.3 billion, for NYSE Euronext, topping the bid from rival Deutsche Boerse by nearly 19%. Shares of NYSE rose 10% in premarket trading to $39.10. Nasdaq's stock fell 4%, while shares of ICE slid 2.5%.

Economy: Also on tap for Friday morning, the Institute for Supply Management's March manufacturing index and the Commerce Department's February construction spending report will be released at 10 a.m.

Economists expect the ISM manufacturing index to remain steady at a reading of 61.4, while construction spending is expected to fall by 0.7%.

World markets: Asian markets ended the session mixed. The Shanghai Composite rose 1.3%, and the Hang Seng in Hong Kong added 1.2%. But Japan's Nikkei eased 0.5%, after a report showed auto sales in the nation plunged 37% in March.