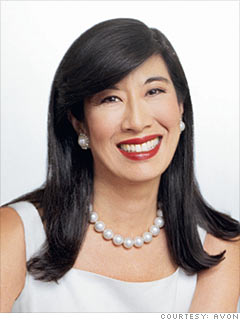 Andrea Jung may have been a bit red-faced when the "lipstick economy" -- women spending more on makeup while sacrificing larger luxuries in a recession -- failed to pan out in this particular downturn.

But Jung, who has led Avon for 11 years, rebounded by pushing hard into a market synonymous with beauty: Brazil. Sales in the South American nation have been the company's biggest during the economic slump. Jung is also strengthening her hold on markets in the U.K., where Avon recently bought skincare line Liz Earle, and China, where it recently opened a new R&D facility.

In the U.S., Jung has continued nurturing Avon's Mark line, which is aimed at sellers and buyers in their twenties, while showing a knack for snapping up celebrity ambassadors at the height of their game. The latest Avon lady, "Avatar" star Zoe Saldana, released a branded fragrance in January.