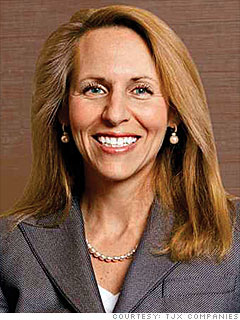 TJX's Carol Meyrowitz keeps a low profile -- and in 2009, she let a simple marketing coinage -- "Maxxinista" -- do the talking for her.

The T.J. Maxx ad campaign, which portrayed budget-conscious fashionistas getting great deals at the discount retailer, tapped into shoppers' thrifty sensibilities and yielded a great 2009 for the company, which also owns Marshalls and HomeGoods.

Meyrowitz, who became CEO in 2007 after three decades in retail, is enjoying a record stock price and profits -- and not just because of her stores' deep discounts. Off-price retailers Loehmann's and Filene's Basement have both struggled throughout the downturn, but Meyrowitz's flair for making bargain shopping as fun as boutique browsing has kept TJX in the black.