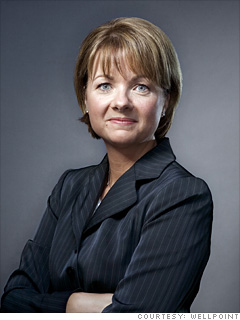 President Obama's sweeping health-care changes have all insurance executives holding their breath, but WellPoint CEO Angela Braly (who also became chairman in March) is already accustomed to pressure-cooker circumstances. She was recently called upon to explain to Congress why her company raised rates by about 40% in California last year.

Braly, who once served as WellPoint's general counsel, flatly defended the price hike, citing skyrocketing care-related costs. In doing so, she became a lightning rod in the Obama administration's push to pass health-care reform -- the bill's advocates held up WellPoint's rates as a sign of needed reform. Braly's recent 51% compensation boost only helped turn the heat up on her, WellPoint and the industry at large.

Outside of political matters, Braly plans to focus on minimizing losses in 2010. The company recently said it expects enrollments and revenues to fall this year due to continued economic pressure.