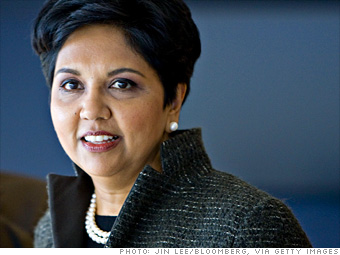 In a climate of sluggish consumer spending, PepsiCo is giving off vibes that are downright bubbly. That's because CEO Indra Nooyi has spent the recession doggedly pushing Pepsi brands.

Her efforts have produced mixed results though. The first half of 2009 brought two costly marketing flops. First, O.J. traditionalists railed against a rehaul of Tropicana packaging. Then, a marketing push to reverse flagging Gatorade sales failed -- and the sports drink's struggles cost PepsiCo an overall drop in sales. But Nooyi has also pressed on with bold promotional gambles, like eschewing a Super Bowl ad for the first time in 23 years and allocating $20 million to a Facebook-based ad effort.

Nooyi, who's been CEO since 2006, also latched on to Michelle Obama's quest to combat child obesity, vowing to pull soda from schools in 200 countries by 2012 and agreeing to move nutritional information to the front of beverage containers by that same year.

NEXT: Irene B. Rosenfeld