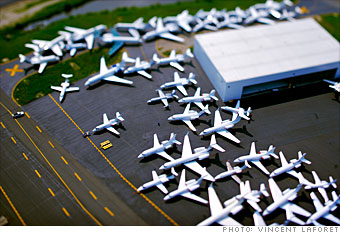 Myth: Soon jets will run on biofuels, enabling us to fly guilt-free.

Reality: Time to come down to earth.

It is true that Richard Branson, president of Virgin Air, ran one of his passenger jets on an 80-20 mix of jet fuel and a special biofuel made from coconut oil and babassu nut oil.

Is it a solution? Branson said he did it just to show it could be done. But don't expect the most common biofuel -- corn ethanol -- to be firing up 777s anytime soon.

Ethanol provides roughly a third less energy per gallon than jet fuel. No problem. Just add a bigger fuel tank, right? But that adds more weight, which means you need to design a bigger, stronger plane, which in turn needs more fuel to travel the same range. This vicious cycle means that ethanol isn't practical.

Airlines have been testing fuels made from jatropha and palm oils, but those fuels remain expensive and lack the hydrocarbon rings that interact with the seals in current engines, helping swell them shut -- not ideal if you happen to be a passenger on the plane. -- Brian Dumaine