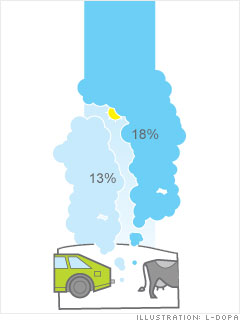 Myth: Cars are one of the biggest emitters of greenhouse gas.

Reality: Yes, but those hamburgers you like to gobble down are actually much worse.

A report by the UN's Food and Agriculture Organization cited livestock, and especially beef, as a major source of greenhouse gas, generating more than transportation.

Meat accounts for 18% of the greenhouse gases the world produces every year, compared with 13% for vehicles. Other studies put that percentage even higher.

"Beef is the biggest ecological no-no," says Anna Lappe, author of Diet for a Hot Planet and a board member of the Rainforest Action Network. "Cattle require the most feed to produce a pound of meat, and as ruminants, the animals emit methane gases during digestion." -- D.T.