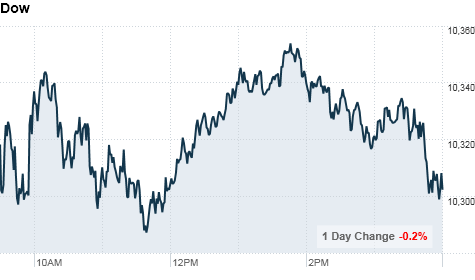 All three indexes had been trading on either side of breakeven in morning trade.

"It's low-volume season, also known as August," said Kim Caughey, senior equity analyst at Fort Pitt Capital Group. "Traders are on vacation, and we get some pretty crazy reactions -- or lack of reactions -- because of that."

The retail sales and consumer sentiment data "go hand-in-hand and provide a clearer picture on the mood of consumers and how they're spending," said Peter Cardillo, chief market economist at Avalon Partners.

After slight gains Monday, all three stock indexes closed lower from Tuesday to Friday amid a raft of downbeat economic reports and some tepid earnings results.

Stocks were also under pressure throughout the week after a Tuesday report from the Federal Reserve, which gave its most bearish outlook in more than a year and said the economic recovery is weakening.

JCPenney (JCP, Fortune 500) was down almost 4% after it forecast a full-year profit below Wall Street expectations. Nordstrom (JWM) was still off more than 6% after its late-Thursday earnings report showed higher inventories.

Economy: The University of Michigan Consumer Sentiment Index for early August rose to 69.6 from 67.8 the previous month, just missing expectations.

A report released later in the morning showed business inventories had edged up 0.3% in June.

General Motors is expected to announce a stock offering as early as Friday to bring the company public again -- a day after the automaker said that it is getting its fourth CEO in just under 18 months.

Dell (DELL, Fortune 500) was accused of refusing to comply with court orders to reveal secret documents in an ongoing dispute with client Advanced Internet Technologies over allegedly faulty computers.

European shares rallied earlier in the morning following strong economic growth in the region, but indexes ended mixed. Germany's DAX fell 0.4%, while the CAC 40 in France dropped 0.3%. The FTSE 100 in Britain turned up 0.2%.

The German economy, Europe's largest economy, grew at its fastest pace since reunification in 1990 in the second quarter of the year, up 2.2%.

Currencies and commodities: The dollar gained against the euro, the U.K. pound, but fell versus the Japanese yen.

Oil futures for September delivery fell 35 cents to settle at $75.39 a barrel.

Bonds: Prices for Treasurys were higher. The 10-year yield hovered near a 16-month low of 2.69% on Friday from 2.75% late Thursday. Bond prices and yields move in opposite directions.