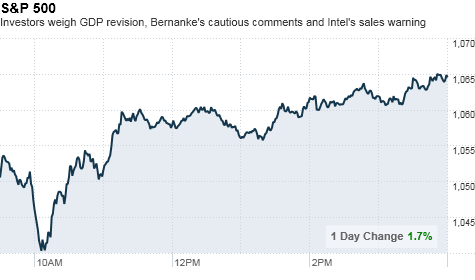 NEW YORK (CNNMoney.com) -- The economy is slowing, the Fed is cautious about the recovery and the world's biggest chipmaker is lowering its sales forecast. But stocks rallied more than 1% Friday.

"The market is starving for something decent to look at," said Rob Russell, president of financial planning firm Russell & Company.

Second-quarter GDP, the broadest measure of economic activity, was revised sharply lower, but was less drastic than forecast. Meanwhile, Fed Chairman Ben Bernanke said the recovery is sputtering, but stressed that the Fed has the tools to ensure continued growth.

"None of this is good information, [but] the GDP revision was better than what people were looking for, and the fact that Bernanke outlined some options about what the Fed could still do and is willing to do has helped an uptrend," said Russell.

On Thursday, the major indexes were unable to hold early gains despite a better-than-expected report on initial jobless claims. Trading has been choppy this week as investors remain wary about the economic outlook, following two disappointing reports on the housing market.

Economy: Second-quarter GDP was revised to an annual growth rate of 1.6%, according to new government estimates.

The figure dropped significantly from the initial reading of 2.4%, but topped expectations of a slide to 1.4%.

At an annual meeting of central bankers in Jackson Hole, Wyo., Fed Chairman Ben Bernanke said the economic recovery is "less vigorous" than expected but said the Federal Reserve has the tools needed to help the nation maintain growth.

"The disappointment with Bernanke's speech is that it seems no action is imminent," said Mark Luschini, chief investment strategist at Janney Montgomery Scott. "The Fed is saying we have the tools on hand, but we're not pulling the gun out of the holster today, which investors take to mean that we're going to stay in this economic slowdown."

Separately, the Reuters/University of Michigan index of consumer sentiment for August was unchanged from a preliminary reading earlier this month and edged up to 68.9 from 67.8 in July. The figure bounced off the eight-month low hit in July but just missed economists' forecasts.

Companies: Intel (INTC, Fortune 500) issued a revenue warning, saying that its third-quarter sales will fall below the company's previous expectations. Shares, which were halted for 15 minutes Friday, gained more than 1% after they resumed trading.

"Intel coming out revising its revenue to the lower end of its range only further exacerbates the fears that the economy's growth is stalling," said Luschini.

World markets: European shares rallied. The CAC 40 in France and Britain's FTSE 100 ended 0.9% higher, and the DAX in Germany gained 0.7%.

Currencies and commodities: The dollar fell against the euro but rose versus the British pound and Japanese yen.