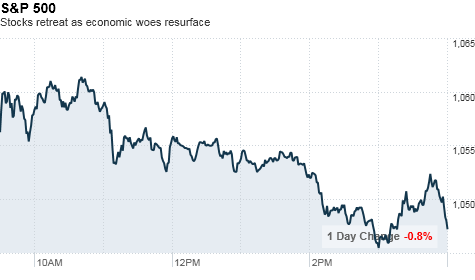 An earlier bounce lost steam as investors turned their focus to the economy, bracing for the latest reading on second-quarter gross domestic product due early Friday. GDP, the broadest gauge of economic activity, is expected to show the economy grew much less than previously estimated.

"When things are as bad as they are, any news like [today's] jobs data showing a slight improvement helps," said Gary Webb, CEO at Webb Financial Group. "But we're still in a mess, and I think it's going to continue to be a rocky road for the market until we see some gradual momentum."

The three major indexes finished higher Wednesday after spending most of the session in the red following an unexpected plunge in new home sales.

Economic gloom continued to hang over investors Thursday, with losers outnumbering winners by nearly two-to-one on both the New York Stock Exchange and the Nasdaq. Declines were broad based, with big names like Intel (INTC, Fortune 500) losing more than 1%, while winners included Boeing (BA, Fortune 500) and First Solar (FSLR).

Economy: The Labor Department said the number of people filing for first-time unemployment insurance eased to 473,000 last week, which was lower than forecast.

But the weekly jobless claims report wasn't enough to calm jittery investors, especially with a closely-watched GDP reading on tap Friday. Economists expect the government to revise second-quarter GDP to 1.4%, a significant slowdown from the previous reading of 2.4%.

"We're pretty much just waiting for the GDP number at this point, and everybody is anticipating a poor number," said Ron Kiddoo, CIO at Cozad Asset Management. "If it comes in as expected, we may not see much movement since we seem to already be pricing that in, but if you have a number below 1%, the market could get really ugly."

Shares of Toyota (TOYOF) fell more than 1% after the automaker said it will recall more than 1 million Corolla and Corolla Matrix vehicles due to engine problems.

The Federal Aviation Administration proposed a $24 million fine against American Airlines. The airline said it will challenge the civil penalty, which would be the largest fine in FAA's history. Shares of AMR Corp. (AMR, Fortune 500), which owns American Airlines, fell nearly 1%.