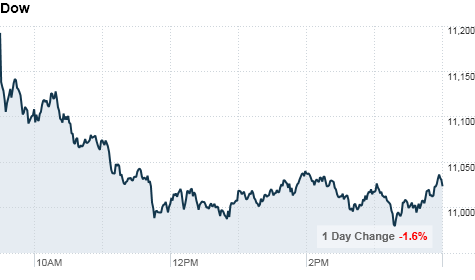 The Dow and the S&P posted the biggest one-day losses since Aug. 11 and Aug. 19, respectively. The Nasdaq's drop was the largest since Oct. 19.

The day's sell-off also puts all three indexes on track to post a decline for the month of November, erasing the gains logged after the Republican victory in the midterm elections and the Federal Reserve's announcement to pump $600 billion in to the economy.

Traders on Wall Street have been holding back on buying recently, as they await more clarity on the economic outlook for the United States, Europe and China.

As a result, investors have been taking their cues from daily economic indicators, and have been keeping a close eye on debt auctions in fiscally challenged countries such as Ireland.

"The concerns about the global economy, with the fiscal situation in Ireland, are clearly back on the table," said Peter Tuz, president at Chase Investment Counsel. "There's a little bit of nervousness out there."

Irish prime minister Brian Cowen outlined in a speech on Tuesday the steps that his government has been taking to stabilize the Irish economy and reduce the deficit. Most importantly, as far as investors are concerned, he said that his country will not be seeking a bailout.

"Ireland has made no application for external support," he said.

Investors had braced themselves for news of an Irish bailout and its potential threat to economic stability.

The persisting global economic woes have helped lift the dollar. The dollar index, which measures the buck against a basket of foreign currencies, rallied 0.9%. Earlier, the index touched 79.46, the highest level since Sept. 28.

The stronger buck weighed on commodity prices and the energy sector, Tuz said.

Stocks ended mixed Monday, after an early advance on merger news gave way to jitters about the economy.

General Motors announced an increase in the target price and size of its initial public offering. The target share price for common stock moved to $32 to $33 from its previous estimate of between $26 and $29 per share. As a result, the total size of GM's IPO is now expected to be close to $16 billion.

Economy: A government report on the latest Producer Price Index was delivered before the bell. The report is considered an important reading on the price of goods at the wholesale level. A report on industrial production is also expected Tuesday.

Producer prices rose 0.4% in October, matching the growth rate for the previous two months, but falling short of analyst expectations. The measure had been forecast to have risen 0.8% for October, according to a consensus of economists surveyed by Briefing.com.

Excluding energy prices, the so-called core PPI decreased by 0.6%. It had been expected to be flat at 0.1%.

Economists expect industrial production rose 0.3% in October, after a 0.2% decline in output the month before, according to the consensus estimate from Briefing.com.

Currencies and commodities: The dollar strengthened against the euro, British pound, and the Japanese yen.

The dollar index, which measures the buck against a basket of foreign currencies, rose 0.9%. The stronger dollar has weakened commodity prices.