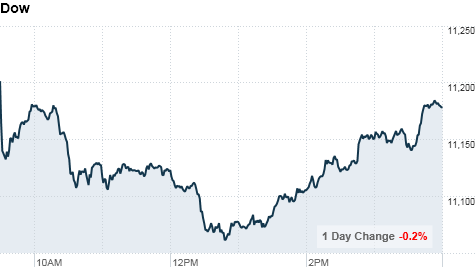 Goldman Sachs (GS, Fortune 500) was the S&P 500's laggard, with shares tumbling 3.4% following a weekend report that investigators are looking at possible insider trading allegations tied to the firm's dealings in transactions including a health-care merger.

Trading could be choppy this week, with many market participants taking time off ahead of the Thanksgiving holiday. Trading volume was on the light side Monday, but still within normal range. Below average trading volume can contribute to volatility. All U.S. markets will be closed Thursday.

Investors were in "a holding pattern" Monday with no economic news on tap, said Alan Lancz, president of Alan B. Lancz & Associates. But the rest of the week brings a full plate of economic indicators: a revised reading on U.S. economic growth, housing data and durable goods orders, as well as personal income and spending figures.

Eyes on the Emerald Isle: On Sunday, Irish Prime Minister Brian Cowen formally requested substantial financial assistance from the European Union and the International Monetary Fund. The group is now working to hammer out final details of a rescue package worth tens of billions of dollars.

"In the morning, it looked like a rally on thoughts that Ireland will be in better shape now," Lancz said. "But we really don't have a catalyst on the upside during this short week."

Stocks eked out gains Friday, ending a volatile week with a whimper. The volatility was driven by nervousness over China's efforts to temper bank lending and the potential bailout for Ireland.

Companies: Netflix (NFLX) shares jumped to end 8.8% higher after the company announced a streaming-only video service for $7.99 a month. The streaming plus DVD rental service price will increase to $9.99 a month.

Green Mountain Coffee (GMCR) announced late Friday that it will restate earnings for the last three fiscal years and the first three quarters of the current fiscal year, because of accounting errors. Shares surged more than 18% Monday after the company said those issues had been resolved.

Novell (NOVL) shares closed 6.6% higher after the software maker said it had agreed to be bought by Attachmate for $2.2 billion.

Currencies and commodities: The dollar weakened against the euro, the Japanese yen and the British pound.

Gold futures for December delivery turned around from earlier losses and added $5.50 to settle at $1,361.70 an ounce.