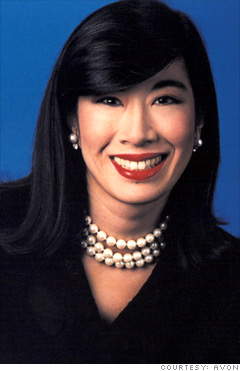 Title: Chairman and CEO
Company: Avon
Company rank: 255
Age: 50
Compensation: $11.1 million
Widely recognized for engineering a turnaround at this iconic American company, Andrea Jung is determined to make the whole world beautiful. And she's succeeding: With more than 75% of sales now outside the U.S., Avon has seen double-digit revenue gains in China and parts of Latin America.
But the strengthening dollar has been a drag on foreign revenues, and the company has been forced to eliminate 2,500 to 3,000 jobs and freeze salaries in an effort to save about $200 million by 2013.
Still, cost-cutting hasn't kept Jung -- who sits on the boards of GE and Apple -- from dressing up Avon's image; the company spent over $350 million on advertising last year, enlisting the likes of Reese Witherspoon and Courtney Cox for campaigns.