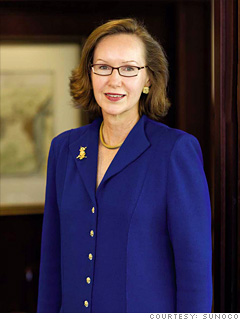 Title: President, chairman and CEO
Company: Sunoco
Company rank: 41
Age: 52
Compensation: $1.9 million
The petroleum industry hasn't always had the best reputation, especially with today's growing focus on 'green' living, but Lynn Elsenhans doesn't think it has to be that way.
A veteran of Royal Dutch Shell and the first woman to head a major U.S. oil company, Elsenhans recently called for her industry to support climate change legislation, an increase in the federal gasoline tax, and the development of all sustainable energy sources.
It's an aggressive tack -- especially since annual American gasoline consumption fell last year for the first time since 1991 and Sunoco saw 2008 profits drop 13% to $776 million. But Elsenhans plans to keep Sunoco nimble, including a planned $300 million in cost cuts by the end of 2009.