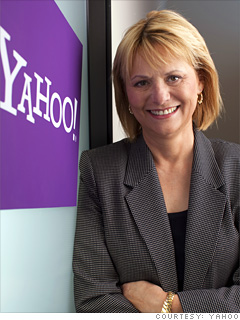 Title: CEO
Company: Yahoo
Company rank: 345
Age: 60
Compensation: $19 million (2009, based on CNNMoney analysis)
Carol Bartz is known for her candor, and since being named CEO of Yahoo in January, she's wasted no time telling it like it is.
The former Autodesk CEO acknowledges Yahoo's problem areas: internal communication, decision-making, and focus -- never mind 1,500 layoffs and a 36% decline in profits last year. But she doesn't think those are reason to start selling pieces of the company to the highest bidder.
That hardly means a deal with Microsoft is out of the question, but for the time being, Bartz is focused on getting Yahoo in order: Determined to look beyond search, she's stressed growth in content and information, said she's open to partnering with social networking sites, and restructured the company to streamline its hierarchy and strengthen its global presence.