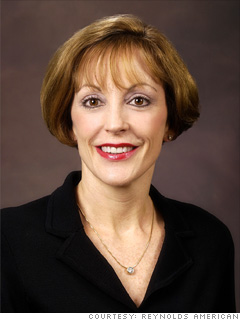 Title: Chairman, president and CEO
Company: Reynolds American
Company rank: 294
Age: 50
Compensation: $8.9 million
Tobacco has proven to be resilient through the recession, as Susan Ivey -- a 25-year veteran of the industry -- is fond of pointing out. But that hardly means times have been good. Sales fell 2% last year to $8.8 billion and the largest federal tobacco tax increase ever started being levied last month. While cash-strapped consumers haven't exactly kicked the habit, they're turning to less costly tobacco products to quell their cravings.
Last fall, Reynolds American and its largest subsidiary, R.J. Reynolds Tobacco, announced plans to cut 570 full-time jobs, generating cost savings that are expected to grow to $55 million a year by 2011. And the company's focus has shifted to smokeless tobacco -- including new dissolvable tobacco products -- which may be more attractive as smokers' ranks decline.