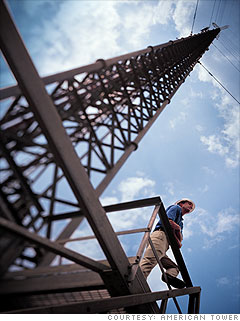 • Consider bonds, but forget Treasuries
Ticker: AMT
Market cap: $16.4 billion
2008 revenue: $1.6 billion
P/E ratio: 51*
Dividend yield: none
The conventional way to play the smartphone trend is to buy shares of handset makers like Research in Motion and Apple, both of which have soared in recent years.

BlackBerrys and iPhones are likely to continue flying off the shelves -- but they're useless without service, which in turn depends on wireless tower operators. That's where the industry leader, American Tower, comes in.

Because people are using their phones for increasingly complex tasks, burgeoning data consumption is straining carriers like AT&T. To relieve their networks and install new technologies like 4G, telecoms need companies like American Tower.

The company's business model is simple: It owns 26,000 towers around the world and leases space to carriers, who sign multiyear contracts that come with annual price escalators. Because of zoning laws, American Tower controls large territories without threat of competition.

Three companies dominate the industry. American Tower is not only the biggest but also the best managed, according to Oppenheimer analyst Timothy Horan.

The company boasts higher profit margins than its competitors. And it has the lowest debt-to-capital ratio in the group, leaving it cash to buy operators overseas, where it does about 15% of its business. According to Horan, wireless penetration in emerging markets is still low: 34% in India and 67% in Mexico.

At first glance the valuation looks frothy: Its forward P/E is 51. But David Rainey, manager of the FBR Focus Fund, argues that American Tower's P/E doesn't capture its value because accounting standards require it to overstate the depreciation of its towers.

Using price to free cash flow, which Rainey contends better represents its growth potential, American Tower is trading at a forward multiple of 17, on par with its more sluggish peers.

For fans of the stock, the business case for American Tower more than justifies the valuation.