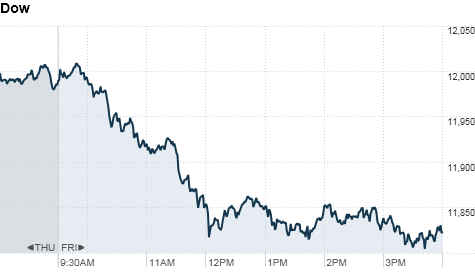 Those were the biggest drops since August for the S&P 500 and Nasdaq.

Investors are worried that the situation in Egypt could intensify over the weekend, and took some money off the table ahead of that possibility.

The CBOE volatility index (VIX), which is known as the VIX and is used to gauge fear in the market, jumped more than 24% Friday.

"Political turmoil is not good for the stability of the market, and Egypt is a populous country that borders one of the busiest shipping routes in the world, so that's getting investors nervous," said Peter Tuz, president at Chase Investment Counsel.

The Market Vectors Egypt Index ETF (EGPT) slipped 3.4%. The ETF tracks the performance of companies that are either listed on an exchange in Egypt or that generate the majority of their revenues in Egypt.

Oil also rallied on concerns about crude shipments through the Suez Canal, which is controlled by Egypt. About 8% of global sea trade travels through the canal, making it one of the world's busiest waterways.

Investors are also taking in quarterly financial results and the latest reading on U.S. economic growth.

U.S. markets have been steadily rising, with the Dow briefly eclipsing the 12,000 benchmark earlier this week.

Economy: The U.S. economy grew at a 3.2% annual rate in the fourth quarter, according to an advance reading on gross domestic product released Friday morning. That's up from a 2.6% rate in the third quarter.

Though the figure missed economists' expectations for a slightly higher 3.5% rate, personal consumption, a measure of consumer spending, jumped by 4.4% in the fourth quarter -- the strongest increase in that reading in at least four years.

The University of Michigan's consumer sentiment index rose to 74.2 in January, slightly better than the 73.2 expected by economists.

Losses in Japan came as investors had a chance to react to Thursday's news, that Standard & Poor's downgraded Japan's sovereign credit rating to AA- from AA on concerns of mounting debt.

Currencies and commodities: The dollar fell almost 1% against the Japanese yen, but rallied 1% versus the euro and 0.4% the British pound.

Bonds: The uncertainty over Egypt also boosted demand for the safety of U.S. government debt. The price on the benchmark 10-year U.S. Treasury rose, pushing the yield down to 3.33% from 3.39% late Thursday.