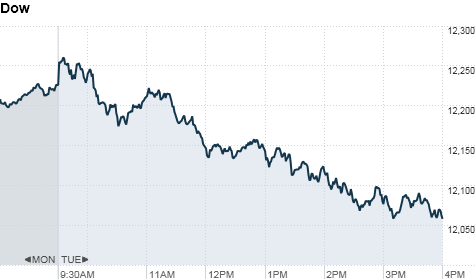 NEW YORK (CNNMoney) -- U.S. stocks tumbled Tuesday, with all three major indexes down more than 1%, as oil prices spiked to nearly $100 a barrel.

The sell-off came as oil prices for April delivery continued to head higher, climbing $2.66 to settle at $99.63 a barrel amid ongoing uprisings in Libya and the Middle East. In electronic trading, crude prices topped $100 a barrel Tuesday afternoon, after crossing that mark last week for the first time since 2008.

Tensions in the Middle East and North Africa will continue to cast a shadow on the market, said Matt King, chief investment officer at Bell Investment Advisors.

"Bernanke's comments reconfirm what the market's fear has been since the Libyan situation started," King said. "Bernanke hasn't been too concerned about inflation, especially in relation to high commodity prices, so this is the first time he's outlining a potential scenario with inflation."

"It's just another hit to investor confidence, and it's scary to think about potential repercussions," said Dave Rovelli, managing director of U.S. equity trading at Canaccord Adams. "All this insider trading at hedge funds can make individual investors hesitant to come back to the market."

Investors are also looking ahead to the government's monthly payroll report on Friday, which will reveal how many jobs were created in February.

Despite a slight step back last week, stocks closed out February on an upbeat note -- posting their third-straight month of gains. Overall, all three major indexes were up nearly 3% during the month, and have risen more than 5% since the beginning of the year.

Economy: The Institute for Supply Management's manufacturing index rose for a 19th consecutive month, reaching 61.4% -- a level last seen in May 2004. The level signals continuing expansion in the sector.

Shares of Las Vegas Sands (LVS, Fortune 500) dropped 6.3% after the casino operator said that it has received a subpoena from the SEC requesting documents related to the Foreign Corrupt Practices Act. The company said it is also being investigated by the Department of Justice.

Currencies and commodities: The dollar rose against the euro, was weaker versus the British pound and firmer versus the Japanese yen.

Will oil force the Fed's hand?