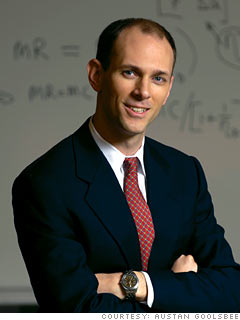 A University of Chicago economist who rejects supply-side tax theory, Goolsbee has been Obama's go-to guy on economics from the beginning - and is behind proposals to raise taxes on business and investment.

He would increase the 15% capital gains tax rate - probably to 25% though he excludes small businesses and new ventures from the tax altogether. In addition, he would raise the dividends tax, reinstate a 45% tax on estates worth more than $3.5 million, and close $1.3 trillion in "corporate tax loopholes."

Goolsbee has studied behavioral response to economic policies and does not fully buy into the Republican argument that lower tax rates end up generating more revenue than they lose (by spurring investment). He notes that Obama wants to go back to the rates of the 1990s, when the economy was booming.

Instead, he believes the tax code should be used to ease financial pressures on the middle class.