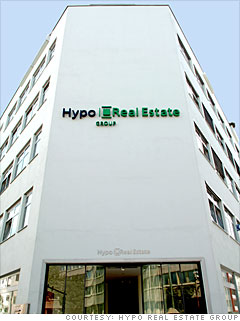 Part of the reason for its troubles: The Irish unit's business included using short-term funding to invest in assets like U.S. mortgage-backed securities. The German government responded to Hypo's woes by providing the bank with more than $140 billion in loans and guarantees. With its role as a big property financer, Hypo's failure would have had a major impact on European property investment. Without assistance, the bank has said it can't survive, and it's now close to complete nationalization.