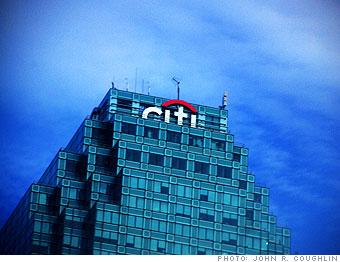 • See more Global 500 data for Citigroup
• Global 500: See the full list
Global 500 rank: 39
2008 loss ($ millions): $27,684
Ticker: C
The global financial supermarket once had great ambitions to extend its franchise to markets like Brazil and India. But last year, though the bank's revenues in Latin America and emerging markets improved, Citi was more focused on survival than expansion.

It lost $14 billion on its investments in subprime mortgages and took $10 billion in writedowns on the value of its many acquisitions. Things were so bleak that the government took an option to buy 36% of the company's shares in February, as a way to shore up global markets' confidence in the institution deemed "too big to fail." Citi also sold off some global assets to raise money, like retail banking in Germany and a securities unit in Japan.

But with the Treasury's recent stress test suggesting the bank still needed an additional $10 billion in capital, the government has begun converting some of its $25 billion in preferred shares into common shares.