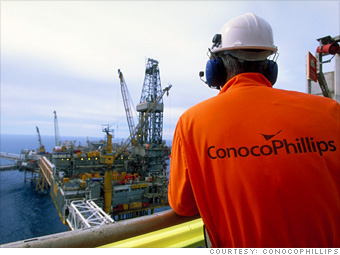 ConocoPhillips is heavily exposed to the United States -- the source of 43% of its production in 2008 -- where oil and gas resources are diminishing, not growing. Last year it lost $35 billion in the value of its oil- and gas-producing properties, including a big chunk acquired at the peak of the market in a $36 billion deal for Burlington Resources in 2006. Trouble was also brewing in the company's long-term plan to expand its overseas assets: A deal to take an ownership stake in Russia's Lukoil and build a new Siberian oil field took a hit, losing billions in value as crude oil prices collapsed.